In l876 there were many celebrations to commemorate the centennial of the signing of the Declaration of Independence on July 4, l776. As part of this patriotic fervor, a group of men in the San Francisco, California, area who were descendants of patriots involved in the American Revolution, formed an organization called the Sons of Revolutionary Sires.

Their objective was to have a fraternal and civic society to salute those men and women who pledged their lives, fortunes and sacred honor to the battle for independence from Great Britain. They desired to keep alive their ancestors’ story of patriotism and courage in the belief that it is a universal one of man’s struggle against tyranny — a story which would inspire and sustain succeeding generations when they would have to defend and extend our freedoms.

Out of the Sires grew the National Society of the Sons of the American Revolution, which was organized on April 30, l889 — the l00th anniversary of the inauguration of George Washington as our nation’s first President. We have used the acronym SAR to identify ourselves for over l00 years. The SAR was conceived as a fraternal and civic society composed of lineal descendants of the men who wintered at Valley Forge, signed the Declaration of Independence, fought in the battles of the American Revolution, served in the Continental Congress, or otherwise supported the cause of American Independence.

The National Society was chartered by an Act of the United States Congress on June 9, l906. The charter was signed by President Theodore Roosevelt, who was a member of the SAR. The charter authorizes the granting of charters to societies of the various states and territories and authorizes the state societies to charter chapters within their borders.

The SAR is a historical, educational, and patriotic non-profit, United States 501(c)3, corporation that seeks to maintain and extend:

• the institutions of American freedom
• an appreciation for true patriotism
• a respect for our national symbols
• the value of American citizenship
• the unifying force of e pluribus unum that has created, from the people of many nations, one nation and one people.

We do this by perpetuating the stories of patriotism, courage, sacrifice, tragedy, and triumph of the men who achieved the independence of the American people in the belief that these stories are universal ones of man’s eternal struggle against tyranny, relevant to all time, and will inspire and strengthen each succeeding generation as it too is called upon to defend our freedoms on the battlefield and in our public institutions. 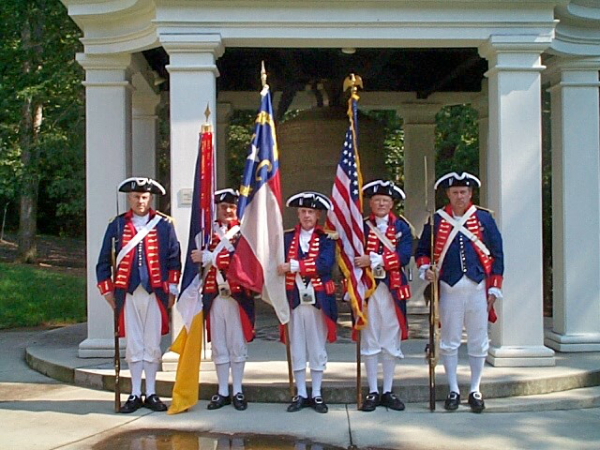 We help preserve and promote our precious American history through celebrating our Patriots by:

Being a member of the National SAR, the North Carolina Society, and the Mecklenburg Chapter is an exciting and personally-motivating opportunity.

There is so much history from the Revolutionary War Era that happened right here in the immediate Charlotte area, not to mention across the great State of North Carolina.

We invite you to contact us and let us help you discover why being a part of this wonderful organization can be one of the most important decisions you make!

When you have your official paperwork assembled, contact our chapter genealogist, Greg Catledge, at [email protected] and he can assist you with completing your SAR membership application.