• Signer of Declaration of Independence
• Military or naval service
• Battle of Point Pleasant, October 10, 1774
• Service from April 19, 1775 to November 26, 1783
• Civil service under the Colonies from April 19, 1775 to November 26, 1783, inclusive Patriotic service by men or women during the Revolutionary period including – Member of committees made necessary by the war, such as Committee of Correspondence, Inspection and Safety; Committee to care for soldiers’ families; including Committees from six months before the Battle of Point Pleasant which furthered the cause of the Colonies.
• Any pledge to support the cause of the Colonies, such as signing the Oath of Fidelity and Support, the Oath of Allegiance, Articles of Association, or the Association Test.
• Members of all Continental Congresses.
• Furnishing a substitute for military service.

• Signers of Mecklenburg Declaration, 1775; Albemarle, Virginia Declaration; and similar declarations. Signers of petitions addressed to and recognizing the authority of the provisional and new state governments. Persons accepting obligations or acting under direction of the provisional and new state governments, such as persons directed to hold elections, to oversee road construction, to collect provisions, etc.
• Members of Boston Tea Party; Kaskaskia Campaign; Galvez Expedition; Cherokee Expedition; Edenton Tea Party.
• Physician, Surgeon, nurse or others rendering aid to the wounded and ministers known to be in sympathy with the Colonies, either by sermon, speech or action.
• Defenders of forts and frontiers; Rangers.
• Prisoners of war, including those on British ship “Old Jersey” and other prison ships.
• Rendering material aid, such as furnishing supplies with or without remuneration; lending money to the colonies, munitions makers and gunsmiths; or anything which furthered the Cause.
• A battle or campaign during the Revolution, Valley Forge; some interesting episode in the life of an ancestor.

Where to Ask Questions:

Prizes and recognitions are also awarded at the SAR State and National levels.

Our 2020 North Carolina SAR Eagle Scout Scholarship Recipient was Blake Robinson, sponsored by the Mecklenburg chapter. Blake is pictured below without our usual pageantry because of the coronavirus event that canceled this year’s Annual Meeting. 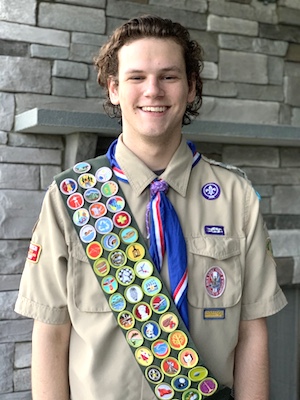 Eagle Scout Jonathan Goforth, from Charlotte, NC, accepts both the Mecklenburg Chapter and the North Carolina’s Eagle Scout Scholarship. In the photo is Jonathan and North Carolina SAR State President George Strunk. Jonathan graduates from high school this year and will pursue engineering degrees at Auburn. 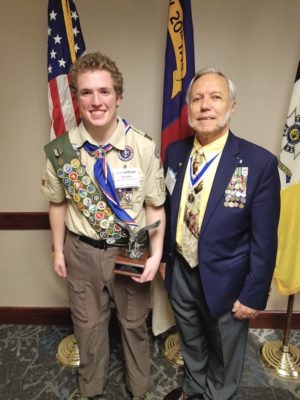 This year’s scholarship and award was earned by Eagle Scout Benjamin Gibson of Troop 11 in Charlotte. In the photo below, Benjamin, along with his mom and dad and chapter Eagle Scout program chairman Tim Berly, listen to Benjamin’s accomplishments that lead to his Eagle Scout scholarship. 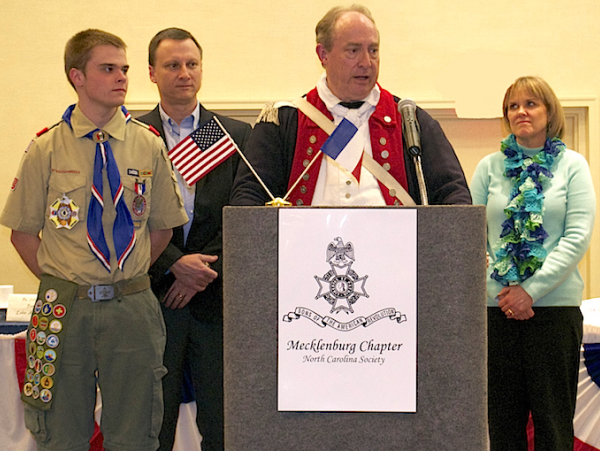 Allen is a member of Troop 1 which is sponsored by Holy Comforter Episcopal Church in Charlotte. He has been involved in Cub and Boy Scouting for 11 years, earned 26 merit badges, was inducted into the Order of the Arrow and served several leadership positions in his troop including Patrol Leader and Assistant Senior Patrol Leader. 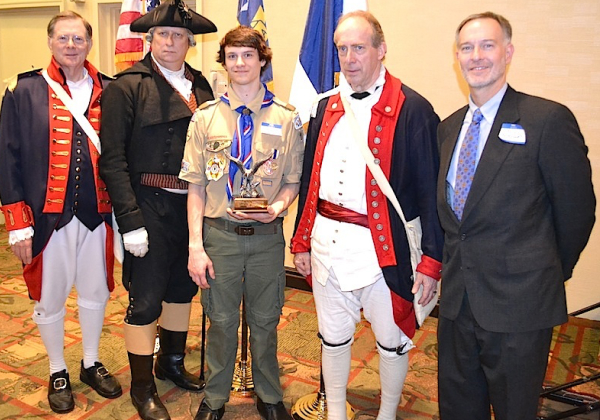